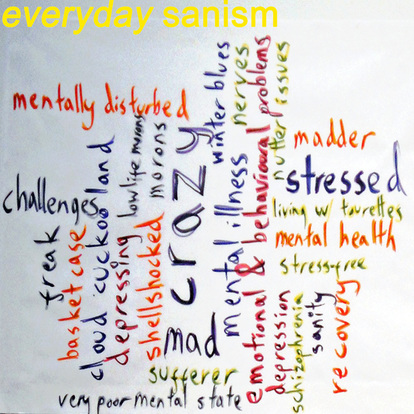 "Sanism describes the systemic subjugation of people who have received mental health diagnoses or treatment. Also known as mentalism (see Judi Chamberlain's work for more information) sanism may result in various forms of stigma, blatant discrimination, and a host of microagressions." ( LeFrancois et al 2013 p339)
﻿The idea for the #EverydaySanism project came about due to our own experiences of sanism and discussions within the North East Mad Studies (NEMS) forum about how little recognised an area of discrimination this was. We wanted sanism to have the same recognition as racism, ageism, classism, sexism etc. which is a difficult thing to achieve when even the term sanism is recognised by so few.

"This void in our everyday terminology is telling: it implies that the oppression people with mental illness face is so commonplace and routine that it doesn’t merit its own label. I submit that until we name it, we can’t effectively discuss it, and the absence of this name makes it easy for many of us to ignore it or deny its existence." Cheung (2015)

Sanism is often described as 'mental health discrimination' or 'mental health stigma', we chose to adopt the term 'sanism' for our project because we feel the oppression we face, requires a term that recognises the scale of the issue. We agree with Cheung (2015) who states; "Embracing the use of sanism in our everyday language lets us better acknowledge the many parallels between it and other –isms" .

A key issue in the timing of the project came for us when a member of the NEMS forum spotted a promotional bus for Mastercard and the Rugby World Cup in Newcastle city centre with #44daysofcrazy on it. Now, this example of #EverydaySanism was frustrating enough. That Newcastle were not allowed to take part in World Mental Health Day 2015 to allow room for this bus really irked. Newcastle city council had decided there could be no other public events due to the rugby world cup and in doing so, elevated the rugby world cup and the #44daysofcrazy bus above a chance for some of us based in Newcastle to help address some of the issues of sanism.

#44daysofcrazy is the official hashtag from the official sponsors (Mastercard) of the Rugby World Cup, yet the issue of sanism has largely gone unnoticed. Inspired by the success of other "Everyday ism" projects (Everyday Sexism being the most high profile) we thought we would try and bring sanism to the forefront of people's minds.While some may feel it is ironic for a group named mad studies to be challenging sanism and sanist language, we see reclaiming the language of lunacy as an important part in fighting oppression and the reclamation of our experiences. We identify with the term mad and find reclaiming it empowering.

" To use these words positively is to throw one’s oppression in the face of the oppressor ...To reclaim is ultimately a political act, and to not allow these words to be insults, to not allow them to make us feel shame, is a powerful move." Wagner A (2012)
Sanism is a broad term, this article couldn't go into all in which it encompasses but here are a few examples of how we feel #EverydaySanism is used in society.Our hope is to engage people in a conversation about sanism and show people just how prevalent this is in our society and we hope you will be a part of getting this conversation started. You can do this by using #EverydaySanism, tweeting us @Everyday_Sanism or commenting on our Facebook Page Everyday Sanism with whatever examples of sanism you encounter in your day to day lives.

References
Cheung I (2015) Sanism and the language of mental illness available from http://www.ivacheung.com/2015/05/sanism-and-the-language-of-mental-illness/ [accessed 17.10.2015]

Wagner A (2012) Reclamation: Taking Back, Giving Away, and the Future of (Queer) Language, available from http://broadrecognition.com/politics/reclamation-taking-back-giving-away-and-the-future-of-queer-language/ [accessed 17.10.15]